“A lot of focusing on the playbook and learning from the older guys,” Gause said of what made the difference when he made his first big jump. “You can’t just come out here and do what you want to do. You’ve got to come out here and work each and every day. I grinded and I was the most improved. And I’m focusing now to do it even more. My focus level is so high right now. I’m ready to go on the field and crack another opponent.”

PISCATAWAY, N.J. -- Redshirt freshman linebacker Quentin Gause threw his name in the mix for a spot on the two-deep with a solid performance in back-to-back spring scrimmages. Seeking to build on his spring, Gause checks in as a the backup to senior and Big East All-American OLB - Khaseem Greene early in training camp.

Beyond Athletics takes a look at how some former Section V football standouts faired for their first few months of college in 2011.

The 2010-2011 AA High School New York State Player of the year Ashton Broyld, rebounded well from a very tough offseason filled with court dates after making a very serious mistake during a basketball game in Rochester, NY.  "I've learned a great deal and I'm trying to focus on moving forward with better decision making at this point", says the Syracuse University commit.  Broyld goes on to say, "I'm working on my academics, and being the best student-athlete I can be while making the most out of this opportunity".

And that is exactly what he has done for Milford Academy this season, standing 6'3, 230 lbs., some publications have him ranked among the Top 15 Athletes in the class of 2012.  According to 247Sports, he's ranked the #1 athlete in the nation.  Broyld's athleticism helped lead Milford to a 12-0 season, and is looking forward to competing at QB for the Orangeman next season.

After graduating from high school early in 2011, the 2-time All Greater Rochester selection Nick Carroll enrolled into Monmouth University in time to participate in their spring practices and the 2011 Spring Game.  Carroll was a 4-Year high school starter playing RB, LB, and S for Bath-Haverling in Bath, NY prior to arriving at Monmouth.  The 5-11, 198 lb. stud red-shirted this season and is looking forward to playing DB for the Hawks next season.

Former 2010-11 All New York State 1st Team Linebacker: Colin Cooper joined forces with hometown friend Nick Carroll at Monmouth University.  The 6'3 230 lb. giant was a  2-way starter at TE and LB at Geneva High School, Geneva, NY.  This past season at Monmouth saw Cooper playing as a true freshman at LB for the Hawks, highlighted by his first college interception.  Look for Cooper to be a leader on what's anticipated to be a pretty stingy defense next fall.

The former Bishop Kearney graduate Quentin Gause feels right at home during his first year as a freshman at Rutgers University.  While in high school Gause starred as a 4-year starter for The Kings, and explains how different it is on the BCS Div-1 level.  "The pace is much faster, and the learning curve is greater, I'm learning how to play on team where every position is good", says Gause.  "My senior year in high school my team only won 1 game, and I tried to make every tackle and score every touchdown to help lead us to a victory".  Standing 6'1 228 lbs., the 2-Time All New York State Linebacker explains how the transition up to this point has been tough but very productive for him.  "It was frustrating at first due to self expectations, I spent a lot of time in the film room learning as much as I could, I was so used to making all the plays that I was not trusting in my teamates, and worst of all I wasn't even realizing it".  "Now I feel like I am on the right track as my coaches worked with me on being part of a great team and not just a great player", says Gause.  Although the former NUC Gridiron Classic All-Star redshirted his first year, he was scout team player of the week 4 times during the season, and is making the most out of his time on the practice field.  "I get to be a part of my first Bowl experience when we play in the New Era Pinestripe Bowl at Yankee Stadium on December 30th, 2011 vs Iowa State", says Gause.  Look for Gause to be a defensive playmaker the next few years for the Scarlet Knights.

CLASS OF 2014 PROSPECTS
Joseph Gause - WR (Bishop Kearney)  At 14 years of age Joseph Gause currently stands about 6'2 1/2, and 190lbs.  And is slowly but surely beginning to pick up some of the traits of older sibling, and Rutgers bound Quentin Gause.  "He has more raw talent than

I had at his age, and is overall a better athlete,  but has never had to work for it like I did, he's just a natural athlete that's pretty talented at everything, and since he started working-out, his body has already started changing" say's big brother Quentin.  Jojo, as his friends call him, doesn't even realize that the frame he has is pretty much already prototype for a college athlete based on height alone.  Along with great size, and wingspan, Gause has decent hands, and pretty good speed as he claims he can keep up with his older brother in a foot race right now.  Once he learns form and technique off the line, he will be very dangerous. Recruiting notes:  Biggest asset is time, will be very interesting to see what the next 3 to 4 years bring for Joseph. 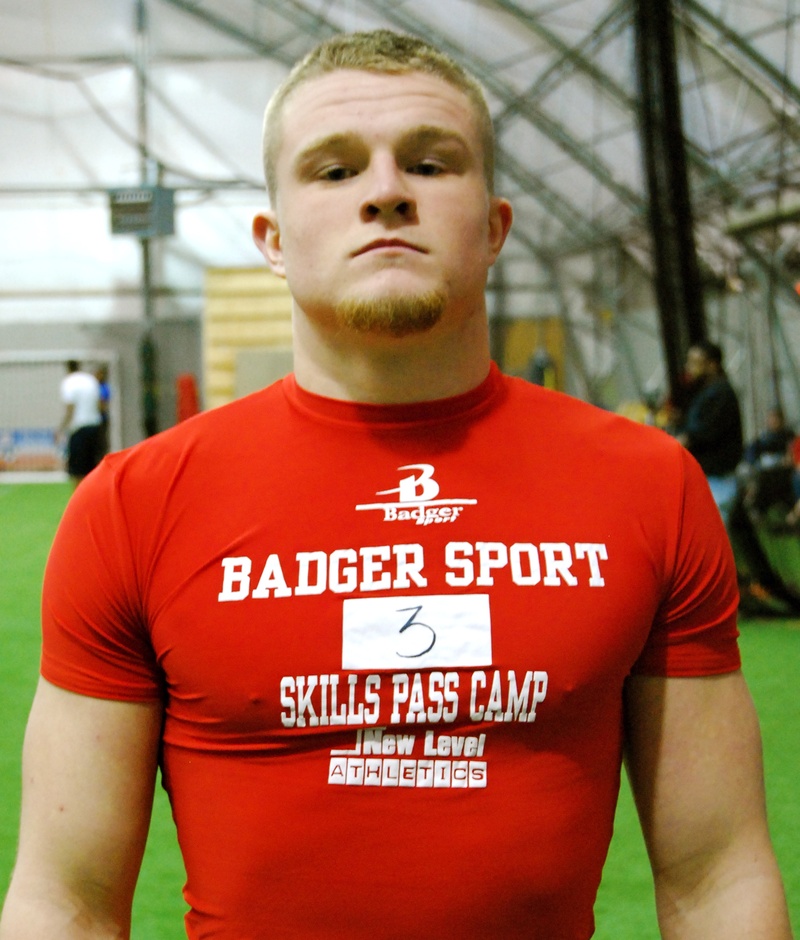 Beyond Athletics would like to congratulate 3 members of the class of 2011 scholarship athletes from Section V.

Nick Carroll out of Bath H.S. Haverling, NY, has accepted a scholarship from Monmouth University, and has already enrolled  as of January of 2011.

Carroll, was a long-time area standout on the gridiron for Bath, and although his senior season was hampered by injury, it was his play during the prior 3 seasons along with summers and off-seasons filled with various national camps and combines that contributed to the 5'11, 205lb athlete recieving an opportunity to extend his football career at Monmouth University.

Joining Carroll at Monmouth is fellow Section V standout Collin Cooper from Geneva H.S. Geneva, NY.  Cooper stands  at a solid 6'3 1/2, 235lbs, and can play both  TE, and MLB very well.  Cooper like Carroll has worked very hard to get to where he is, and has had some big hurdles to overcome along the way.

One fall evening, while in his senior year, Cooper's dad collapsed in the 2nd Half on the sideline while coaching his sons football team.  Needless to say that was the last time Cooper saw his dad alive.  Mike Cooper was very instrumental in guiding not only his own son, but many other locals as well.  All he wanted to see was his boy get a scholarship to play Division 1 football, and he did just that, he was very excited about his son going on to continue his studies at Monmouth University, in the state New Jersey.  Both of these young men are fierce competitors, and now they have the chance to play together on the same team, and I'm sure they will push each other to become better all the time. 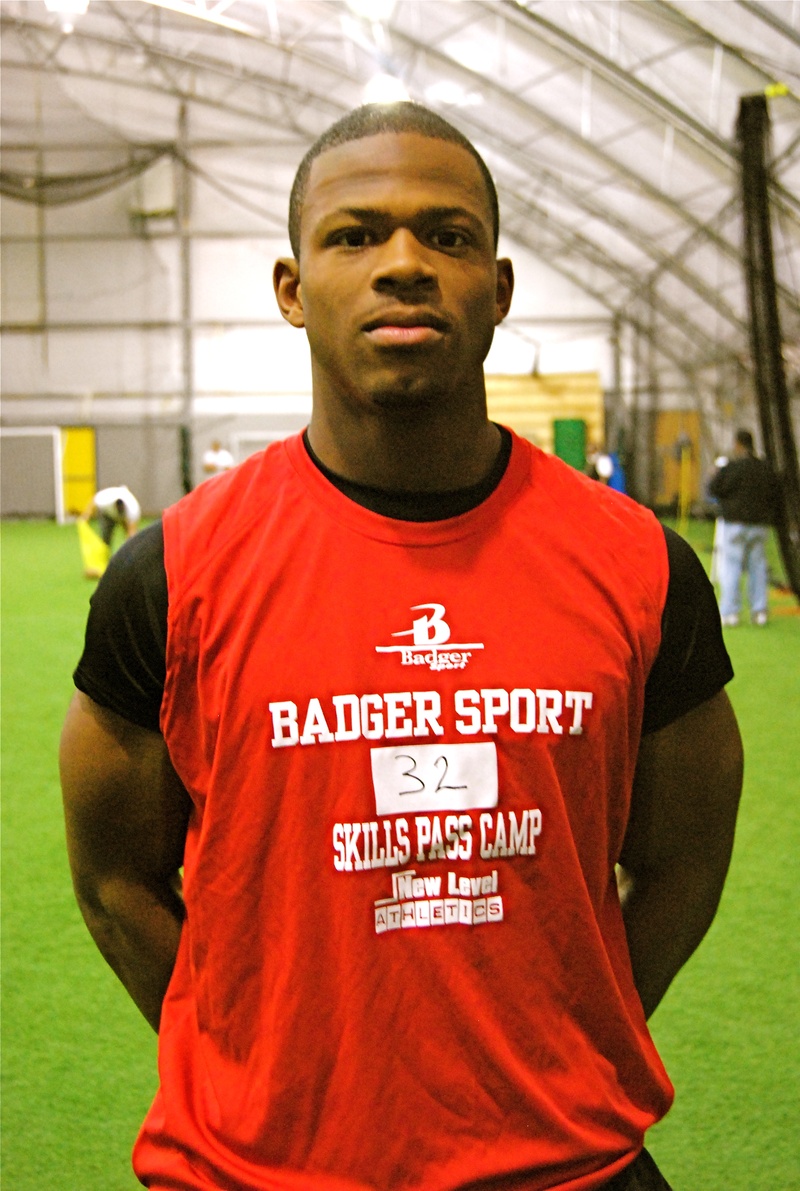 Another Jersey bound Rochester native will be Bishop Kearney standout Quentin Gause who has accepted a scholarship to play football at Division 1  Rutgers University. Gause says that he's very good friends with both Carroll, and Collins, as well as many other prospects in the area. "We all have gone to many of the same camps, and we understand that our area is not really known for nationally ranked high school football prospects, so we must attend camps located in football hotspots like Jersey, Florida, Ohio, and Texas".  Gause also added, "with guys like myself, Ashton Broyld, Collin Cooper, and Nick Carroll coming from Section V class of 2011, we are gonna open the exposure door wider for the younger prospects looking to do the same thing we did".  Gause stands 6'1 1/2, and 220lbs and has a work ethic of a D-1 college senior already, "I've been working hard since the 6th Grade for this moment to come for me", and he has a very strong supporting cast as well.  Gause projects as a OLB for the Scarlet Knights, and says he's only gonna work harder, and harder to continue representing Rochester, NY and Section V.

NY Athlete Proving It's Not All About Geographics

Section V and Bishop Kearney Kings athlete Quentin Gause has earned himself 1st Team Defense as a Linebacker in Schumans inaugural All-Star Game!  Keep in mind this is while competing with some of the best athletes around the country and beyond.

The knock against athletes from NY is that competition is very weak compared to the rest of the country.  Gause has overcame that adversity and really opened some eyes here this weekend with his performance.  The 6'1, 218lb hulk played Outside Linebacker for the first time ever in his career, his challenge was even greater when Gause realized that he was gonna be matched up against the "Spread Offense", which features alot of speedy athletes on the field at one time, and frequently draws mismatches against Linebackers covering Slot Receivers.  Gause's stats:  8 Tackles, 4 Pass Break-Ups (1 nearly intercepted), 2 Tackles for a loss, and 1 TD saving Goal-Line stop on 3rd down!  Remarkable numbers considering he only played about half the game.  Gause proved that geographical rankings are all a myth, until everyone is practicing and playing on the same field.  "Some kids that were nationally ranked on Scout, ESPN, or Rivals, lived up to the hype, and some did not", says Gause.  "I just wanted to come in work hard and show, the country that Rochester, NY and Section V is coming, I won't be the only athlete coming out of our area, we are loaded with talent, but under-exposed".  His hard work is paying off, and Rutgers is getting a hell of a student-athlete.

According to Gause, preparation has been his recipe for success, "I've worked on my weaknesses every week, and I feel much better about playing either Outside, Saftey as well as Middle."  Which gives the Scarlet Knights a few different options on defense.  "I'm much looser in the hips, and my flexibility, endurance, explosion, and quickness, have all increased, and pretty much balanced out with my strength, I am overall a more athletic athlete."  Gause says he cannot wait to get to Rutgers, where he will extend his career playing football, while developing into a better person.  Keep on the lookout for Rochester, NY's Quentin Gause.
Quentin Gause Workout video

Oops! This site has expired.

If you are the site owner, please renew your premium subscription or contact support.