University at Buffalo coach Jeff Quinn likes a number of true freshmen from his 2012 recruiting class. But as it stands now, only two are expected to make an immediate impact while several others won't see the field until 2013. (LEFT: Marcus McGill-UB Roster)

How was your season this year?  As an individual it went very well. The hard work in the off season payed off. I listened to my coaches played every position they told me to and did it well and to the best of my ability. We ended up 3-5 this season.

How is your senior year playing out academically and athletically?  I have been doing well. 87

average. Football went good and basketball season is off to a great start as well. Time to practice and just go harder now.

Is there anyone else in Section V that has the skills to keep up with you?  Haha, you went there!  I don't think so, just kidding....Jahmahal Pardner and maybe a few other guys.  But at the end of the day,  we all have the same goal to perform at the highest level, on the next level.

Do you feel Rochester is starting to get some respect from national recruiters?  Yes, Rochester is on the rise, we are producing a lot of football athletes for college, and will soon be a hot-spot for football.

Are you ready to make your decision in February?  I am ready, I will be attending the University at Buffalo.

Why did you choose this college?  It just felt like the right fit for me, they have three wide receivers graduating, so there?s open spots. It?s just a right fit for me.

How hard did you have to work to get where you are today?  I had to work very hard. Nothing is gonna be handed to you ya know.  I knew that catching a football could lead me to being a doctor or a lawyer one day as long as I handle my business in the classrooom as well.  On the field....sweat, blood, and tears was always left on the gridiron day-to-day, game or practice.  Just consistent effort week-in and week-out.

What do you think you will have to do in college to become the best?  I already am the best, again just kidding.  Seriously though, I have to continue to fight and keep working hard.  Learning from my coaches, and remaining coachable will help me become the best athlete I can possibly be.

What is your future goal?  Go to college get my degree, win championships, and play in the NFL.  Plan B will be for me to use my degree to get the best job possible.

What did you think of LSU and Alabama Game? Bama got after it. LSU QB did not come out like they did last time.  Didn't seem like they made any adjustments in gameplan.

Marcus McGill - WR (Gates-Chili) This kid is the best WR in NY, and probably even the entire northeast region!  Time after time McGill went up and over defenses to make receptions with authority.  He did not drop one pass all weekend, and defenses did not have any answers for him.  All this against top ranked multiple offer kids from other regions.  Showed positive leadership for NY squad no matter what the outcome of the game was.  Recruiting notes:  Will go get the ball at highest point and out-muscle DB's while coming down and completing the catch. Offers should begin to pick up rapidly for McGill.

Section V Class of 2012:  On And Under The Recruiting Radar

Marcus McGill - WR - (Gates Chili)  McGill has the confidence to

compete with the best at the highest level, and the will to get even better, he has a work-ethic that is preparing his body for the challenges he will face at the next level of his career.  He is a 2-way starter at WR / DB for the Spartans.  The 6'1, 205lb. athlete is being recruited by; Akron, East Carolina, Penn State, Pittsburgh, Rutgers, Syracuse, and currently holds an offer from The University of Buffalo.  McGill is just as much of an impact on the hardwood for the Spartans as he is on the football field.  He led his basketball team in scoring, rebounding, and blocked shots.  Next season the all-around stud will strap up his football cleats for his final high school season, and will probably wind up making the AGR, All-County, and maybe even 1st Team New York State.

Team Western NY was led by Section V QB's Dominic Scavo (Hornell), and Corey Benedetto (Aquinas).  And both were exceptional, Scavo got the start, and drove down the field and found Joseph Gause (Bishop Kearney) in the End Zone for the TD.  Gause was covered by Morgan on the play.

Games 2 and 3 were both losses to Maryland (36-20), and Eastern Massechusetts (20-12),  however the losses were productive as some kids began to step up and make names for themselves.  Marlon Anderson (East) proved that he could play multliple positions and ended up switching between OLB and CB.  Anderson held his own in coverage against older multiple-offer kids from other regions, and almost had 2 interceptions in the tournament.  Daron Roper (Rush Henrietta) made many plays from the Saftey position.  Roper broke up pass after pass, QB's kept testing him, and continued throwing his way, he picked 2 off inßrd game.  Speed, great coverage skills, and a nose for the ball are all strengths for Roper.

Game 4 was another victory over East NY (14-6).  Benedetto stepped in as a DB and broke up many plays over the middle.  Buish had another TD catch and only dropped 1 pass in the entire tournament.  His teamates nicknamed him Mr. Hands.  He really showed alot of toughness catching passes all over the field with no fear. 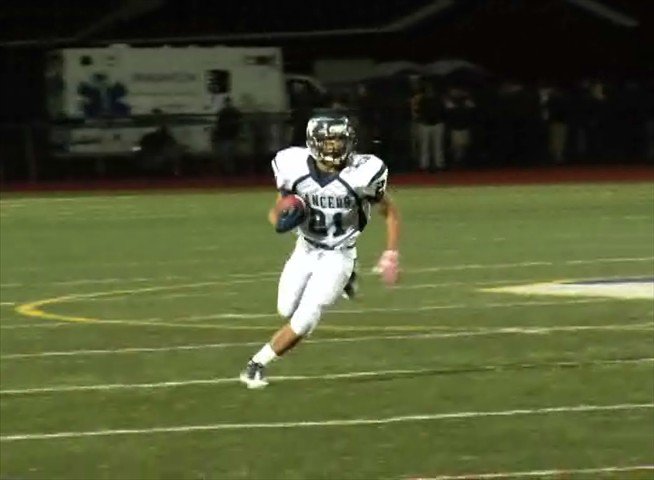 ATH Jeremiah Ortiz (Eastridge) rebounded very well from games 2 and 3.  His ability to focus kept his head in the game.  Ortiz, probably got the most work out of any other WNY player and he ended the tournament with an interception on his final play.  Ellis Randall (Greece Olympia) also played mulitple positions on defense.  Mostly DB, some OLB, Randall's physical play reminded WR's why they shouldn't come across the middle of the field.  And his coverage skills defending RB's out of the backfield was excellent as well.

WNY ended the day at 2-2, and was entered as the 20th seed in the Single Elimination Badgersports Championship Bracket and would be matched up against the 3-1 New Jersey Fly.

Both Scavo, and Benedetto played some D, but they were like kids in a candy store on day 2 when the other Section V teamates walked into the Rutgers bubble.  The arrival of class of 2012 athletes Jahmahl Pardner (Aquinas), Marcus McGill (Gates Chili), and Ishmael El-Amin (Wilson) marked the beginning of the day.  They immediatly made a difference as Day 2 would kick off with a single elimination game at 7:30am.  Pardner made plays on offense, and locked up any and all receivers that he lined up against, had 2 picks and showed why his stock is increasing among college

recruiters everywhere!  McGill had 2 TD receptions on the first 2 possesions and played both ways with authority, his offers will also begin to pick up this spring as well.  It appeared that Pardner and McGill were the best two athletes on the field.  El-Amin broke up any pass that came across the middle as a DB and made his presence known to many recruiters. WNY defeated NJ Fly 35-6 and moved on into the final round to face Virginia.

Virginia came out red hot as they went 40 yards for the TD on the very first play. The offense turned the ball over and WNY found themselves down by 2 TDs within minutes.  Defensive adjustments had to be made, however it was too late for a comeback as

time expired and WNY lost 22-12 to Virginia.  The surprise of the tournament was the play of East High's Marlon Anderson. Even with all the losses,  Anderson asserted himself as an athlete for recruiters to began to put on their radars, he made a few big defensive plays at the end that kept the final score from getting out of hand.

Congrats to all of the Section V athletes that participated in the Badgersports 7 on 7 Tournament.  These guys all received national exposure, and an experience that will continue to help build WNY as a football hotspot!

Gates Chili Wide Reciever Marcus McGill, picked up an offer over the weekend from The University of Buffalo and is expected  to be making not only his 2nd appearance at this event, but 3rd time participating within a Badger Sports uniform, after a stellar Junior season, regional recruiting analyst Matt Alkire of scout.com had this to say: "Marcus McGill may not be from a football state, but the 6-foot-1, 195lb wide receiver from Gates-Chili High School is definitely in a

football state of mind if you check out his junior highlights. He shows good speed, great cutting ability, the ups to snatch the ball at its highest point and the playmaking skills to make people miss in the open field. After watching his film it?s obvious why Penn State, Rutgers, and Syracuse are already on him and he definitely looks like he?ll be picking up offers very soon.  As a sophomore, McGill caught 20 passes for 305 yards. He was named second team All-County as a cornerback". Alkire, goes on to say "Rochester, N.Y., has started to put out some big-name players over the past few years and the Class of 2012 is looking no different."

Oops! This site has expired.

If you are the site owner, please renew your premium subscription or contact support.