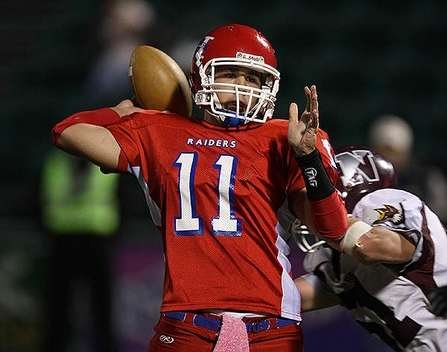 How was your season this year?  My season was excellent , we ended up winning the state championship. So we finished off 13-0.

How is your senior year playing out academically and athletically?  Athletically it’s great football was good, going undefeated and getting my third ring was awesome, and basketball is good we lost three of our last games but we will rebound. Academically I have a 96 average or 3.8 GPA.

How does it feel to win three state championships in a row?  It’s awesome, it was amazing to win the first one and the second time was incredible and the third opportunity was great to top it off especially since it’s my senior year.

Have you ever had the opportunity to work with any other Section V guys?  I played some ball with Marcus McGill 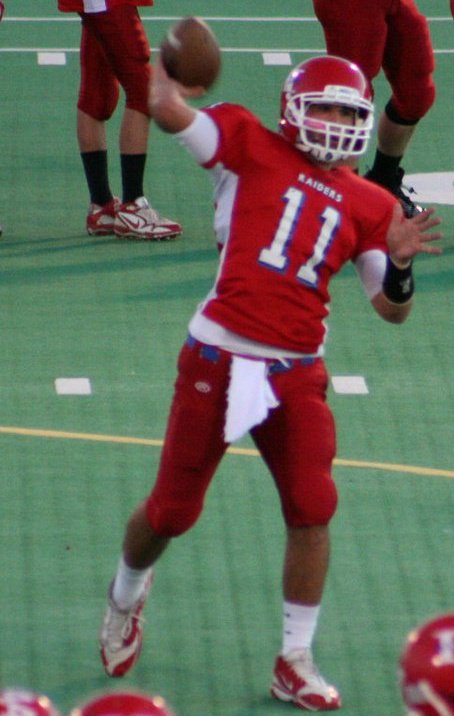 (Gates Chili) during the National 7 on 7 events we attended,  and I had a chance to pass him the ball, he's a great WR.  Jarron Jones (Aquinas) I met once at a football event.  Jahmahl Pardner (Aquinas)is a lock down cornerback and great WR as well, and there are some upcoming underclassmen that are gonna be great as well.  It's good to see that we have a handful of guys presenting themselves the opportunity to play at the next level.  Its great how much Section V recruiting has grown in the past 3 or 4 years.

What is your future goal? Next four years attend a college not sure what school, major in political science, or business and become a corporate lawyer somewhere down south.  I currently have two walk on spots at Northwestern University and Rutgers University.

Dominic Scavo - QB (Hornell)  Once Again, Scavo showed that he can perform effectivley at the next level.  Had somewhat of a slow start, but quickly by the 3rd game became red-hot, as he picked apart an entire defense while throwing 5 TD's.  Recruiting Point:  Scavo is a proven winner after leading his High School team to 2 Class B NYS Championships and Back-to-Back Undefeated seasons, however he remains coachable, teachable, and hungry to improve weaknesses.

Section V Class of 2012:  On And Under The Recruiting Radar

Dominic Scavo - QB - (Hornell) In two seasons as Hornell's starting QB Scavo's stats are as follows:  2,278 Passing Yds (32 TD's), 1,015 Rushing Yds (22 Td's), those numbers have led Hornell to Back-to-Back New York State Class B Championship Titles.  Scavo is also the current New York State Class B MVP.  The 6'4, 220lb signal caller currently has recruiters from Maryland, Rutgers, Syracuse, and is stirring up more attention from others as well.  He has developed into one of the best game managers this state has to offer in the short range passing game; however he is just as precise with the deep ball if necessary.  Hornell will try to make itß state titles in a row in 2011, and they have one of the best QB’s in the entire state leading them in Scavo.

Following in the footsteps of recent Section V greats like Jerome Lewis, Ashton Broyld, Quentin Gause, Nick Carroll, and Collin Cooper, athletes from various high schools around the area will be headed down to Rutgers University, on Feb. 26th and 27th to participate in the East Regional BadgerSports Elite 7on7  Tournament.  This event has been one of the fastest growing opportunities for high school kids to showcase their skills and talents to gain more national exposure.  All the major recruiting sites such as ESPN, Rivals, and Scout will be on hand to identify stand-out athletes in order to better rank kids nationwide.

Scavo, is a  returning starter for The Western NY All-Stars at this event.  The 6'4, 210lb Jr from Hornell NY, has led the Red Raiders to their 2nd consecutive NY State Class B Title, and now has 2 undefeated seasons under his belt.  This is what the experts at Nevel Athletics had to say about his last Badgersports performance as a sophomore: "When watching Scavo’s film he is a natural gunslinger. He reminds me of Kurt Warner from

his look to his delivery of the football.  Scavo can make a lot of the throws he needs to make with accuracy.  Scavo is a proven winner and he has good pocket presence and mobility when pressure is in his face".  Stay on the lookout for Dominic Scavo.